The Northmoor web site will be down most of Tuesday, February 7, and possibly into Wednesday, February 8, while the server it is hosted on undergoes a major upgrade. During that time, please visit our Facebook page for any important announcements. A link for online water bill payment will also be posted there for use during the outage. 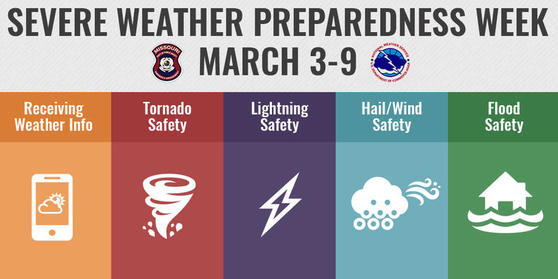 Sheriff Owen would like to pass on this information for Severe Weather Week in Missouri. A State Emergency Management Agency review of Missouri’s 39 flood deaths over the last four years shows the vital importance of understanding the dangers of driving in areas experiencing flash flooding. Since 2015, 34 of Missouri’s 39 flooding deaths –
or 87 percent – were people who had been in vehicles.

“Missourians should keep in mind that flooding – particularly flash flooding – is Missouri’s deadliest severe weather hazard and take action to make sure they’re not putting themselves and their families at risk,” State Emergency Management Agency Director Ron Walker said. “Remember that small creeks, streams and low-water crossings are the most dangerous places, and that you have to pay special attention for flood hazards because visibility is extremely reduced during heavy rains, especially at night.”

From March 3 to 9, the National Weather Service, State Emergency Management
Agency and local emergency managers urge Missourians to learn about severe weather and how to protect themselves during Missouri Severe Weather Preparedness Week. Missouri’s annual Statewide Tornado Drill will be held on Tuesday, March 5 at 10 a.m. (Some Missouri communities may choose to conduct the drill on a different day due to conflicting local events.)
At 10 a.m. on March 5, outdoor warning sirens and weather alert radios across the state will sound, signaling the beginning of the statewide tornado drill and indicating that Missourians should practice taking shelter. If a tornado shelter is not available, the safest shelter location is a windowless basement or an interior room in the lowest level of a building. Put as many walls between you and the tornado.

If severe weather is in the forecast for March 5, the tornado drill will be moved to Thursday, March 7 at 10 a.m.

According to the National Weather Service, Missouri experienced 47 tornadoes with one death and seven injuries in 2018. In 2017, there was one death and 32 injuries due to tornadoes. There were no tornado deaths in 2016 and no injuries. In 2015, there were no tornado deaths and five injuries. Information on tornadoes is available here: https://www.weather.gov/safety/tornado NWS provides safety tips and educational information about tornadoes, severe thunderstorms, flash flooding, lightning and the importance of NOAA Weather Radios on its Severe Weather Awareness Week page: https://www.weather.gov/lsx/severeweek. Each day during the week focuses on a different safety message: Monday, March 4, Have a Plan/Receive Weather
Information Day; Tuesday, March 5, Tornado Safety Day; Wednesday, March 6, Lightning Safety Day; Thursday, March 7, Hail/Wind Safety Day; and Friday, March 8, Flood Safety Day.

More information can be found on Missouri’s Stormaware.mo.gov website, which includes detailed videos about how to take shelter from tornadoes in specific locations, how to avoid flash flooding and useful information about tornado sirens, and weather alert radios. Missourians are also encouraged to utilize Missouri’s Ready in 3 program to create a plan, prepare a kit, and listen for information regarding severe weather emergencies. https://health.mo.gov/emergencies/readyin3/

There are no upcoming events.